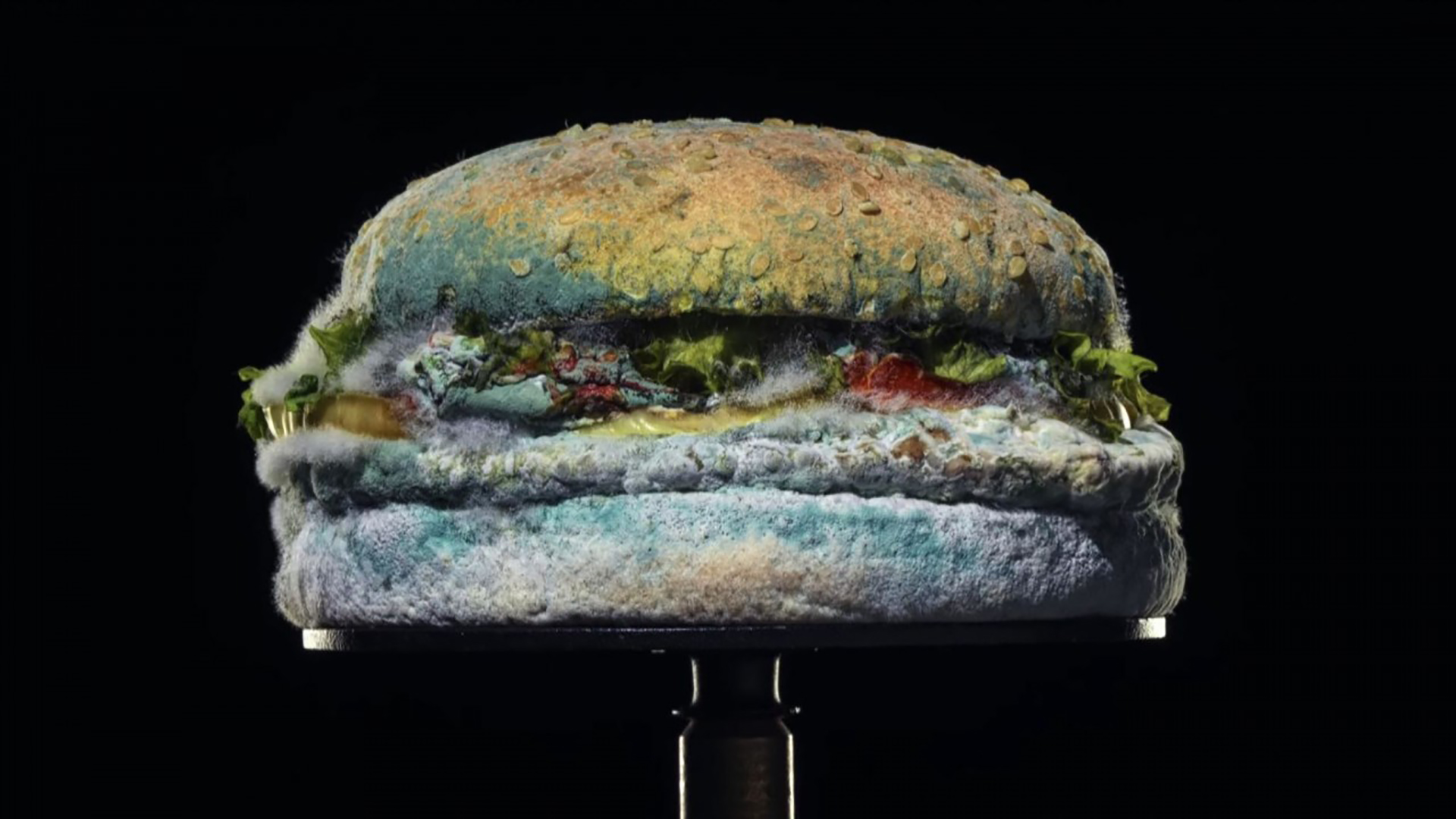 As the year comes to a close we though what better way to wrap up 2020 than a highlights reel of our favourite ads from around the world? Some of the Edge team have given us their top picks for the year from a range of different markets and categories, and there are some absolute crackers. So without further ado, let's get into it:

Being disruptive as a brand is one thing - and Burger King have done it well over the years. But taking your flagship product and filming it going mouldy beyond recognition is another. I admire the bravery of the marketing team involved in this simple product demonstration. It’s so refreshing to see a brand challenging something as holy as the ‘pack shot’, and in my mind, you could not find a more simple, category breaking and disruptive way of dramatizing the fact that they don’t have preservatives in their burgers. Bravo to all involved.

Taboo breaking and visually charming, this campaign captures the complicated relationships that people have with their uteruses. I adore how they have represented a kaleidoscope of experiences by swapping mediums and shifting between plotlines of joy, sorrow and everything in between.

In a year that saw gyms close and an endless number of local and national sports cancelled and global social unrest, Nike’s “You can’t Stop Us” campaign struck a strong chord with me and many others. Apart from the film’s technical brilliance, the underlying message that we are all one is suitably apt in 2020 – reading the play perfectly.

It might seem like a cop-out to include a Christmas spot in this list, but I love what UK supermarket chain Sainsbury’s have done with this ad. It packs an emotional punch, tying up nostalgia, family, home and togetherness to bring a tear to the eye – whilst also throwing a bit of humour for the win. Product is everywhere, without being the only focus of the piece. The production gives the whole thing authenticity. And, crucially, Sainsbury’s has done something incredibly important for the UK’s BAME community with its casting. Bravo, Sainsbury’s.

5. WHATEVER BY RC COLA

This wacky spot from the Philippines for RC Cola fully deserves its accolade of “weirdest ad of the year”. By fully committing to absurd humour and a rejection of traditional advertising storytelling, the ad offers real cut through for its Gen Z audience. It trades any sense of meaningfulness for watchability and taps into a ‘no-need-to-explain’ mindset - or as the tagline says, “whatever”. The best thing – this offbeat approach was a huge success, with the ad racking up millions of views in the first few days. Just goes to show - whatever works.

6. THE WHOLE WORKING-FROM-HOME THING BY APPLE

With brands needing to be relevant relentlessly, I take my hat off to Apple for tapping into so many insightful moments and behaviours that have come from working from home. It runs for seven minutes and every second is carefully choreographed. The characters are so ‘real’ and relatable you can’t help but have an affinity with the brand.

I love the rework of the classic Bud 'Whassup' ad. Not only did it deliver a timely message about checking in on your mates during lockdown in a way that felt natural for the brand, but it cheekily snuck around any Covid-related production issues (all they did was overlay a new track onto the original spot). Budweiser was quick off the mark to get this one out, and for me it was the first 'Covid' ad that really cut through against the litany of gloomy empty cityscape stock clips. Whasssuuuppppp!

Towards the end of last year Ryan Reynolds purchased an ownership stake in Mint Mobile. What followed have been some really cool ads that make fun of the usual advertising tropes.It obviously helps when you can roll out Ryan Reynolds as your spokesperson, but I think these ads are a great example of using creativity rather than massive budgets to get noticed. They are endearing, single-minded, and Ryan Reynolds' delivery is comedy perfection.

9. CNN SPONSORSHIP OF US ELECTION NIGHT BY CALM

In what seems at first glance like the least appropriate brand pairing ever, meditation app Calm scored big from their sponsorship of CNN’s election night coverage, which kicked off with a 30-second spot of nothing but rain falling on leaves. The irony of the Calm logo appearing on screen during Key Race Alerts sent Twitter aflutter, which itself is a huge win for the brand. Context can truly make or break a campaign, and in this case the brand chose the absolute perfect context to remind an anxious audience to pause and take a few deep breaths.

I dig this spot because not only does it truly capture the perils of dating in 2020, the campaign message also harks back to a simpler time when dating was all about having the courage to make the first move. It’s a great metaphor for life in general.